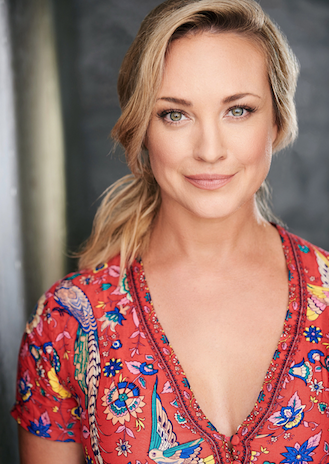 Brandi Burkhardt’s work spans the world of theatre, television, film, live concert performance and recordings.  Currently, Brandi can be seen on Netflix in the CW hit Hart Of DIxie, as Crickett.  On Broadway, Brandi played Sophie in the smash Abba musical, Mamma Mia! and also created the role of Lucie Manette in her Broadway debut, A Tale Of Two Cities, alongside James Barbour, a role which she reprised in London, for PBS, and for the cast recording.  Other favorite theatre credits include playing Guenevere in Camelot opposite Tony Award Winner Robert Sean Leonard, Marian Paroo in The Music Man opposite Shirley Jones, Daisy Mae in Lil’ Abner for Los Angeles’s Reprise series, the international touring production of Jekyll & Hyde:  Resurrection, as Emma, Laurey in Oklahoma! for Sacramento Music Circus, and such shows as Romeo & Juliet (Juliet), The Sound of Music (Maria), and Bye Bye Birdie (Kim).   On television, Brandi starred in NBC’s long-running daytime drama Passions as Siren, daytime television’s first mermaid, and more recently has guest starred on Mad Men, How I Met Your Mother, NCIS, Brothers & Sisters, Boston Legal, Numb3rs and Law & Order: SVU.  Her film credits include Confessions Of A Shopaholic, and with Selma Hayek in Some Kind Of Beautiful.  As a concert artist, Brandi has performed with some of the world’s great orchestras, from Cincinnati Music Hall, and the Atlanta Philharmonic, and the California Philharmonic, at Disney Hall, to the Vienna Symphony.  Brandi had the privilege to sing for the President and First Lady for the National Theatre in the concert version of The Civil War.  Currently at work on her debut solo recording, Brandi can be heard as Emma on Jekyll & Hyde:  Resurrection, and celebrated her first Gold Record, being the only American alongside some of Europe’s greatest singing stars, in the recording of Frank WIldhorn’s The Count Of Monte Cristo (Mercedes).